1. Crush or finely chop the garlic. Coarsely chop the coriander, keeping the leaves and stems separate. Halve the carrot lengthwise and thinly slice on an angle. Halve the olives. Thinly slice half the lemon, then juice the remaining lemon. Crumble 1 stock cube* into a heatproof jug, add 125ml (½ cup) boiling water and stir to dissolve.

2. Combine 2 tsp chermoula seasoning* and 2 tsp olive oil in a large bowl and season with salt and pepper. Cut the chicken thigh fillets into thirds. Add the chicken to the marinade and turn to coat.

3. Heat 2 tsp olive oil in a medium saucepan over medium-high heat. Cook the chicken, turning regularly, for 3 mins or until golden (the chicken won't be cooked through). Remove from the pan.

4. Heat 2 tsp olive oil in the saucepan over medium-high heat. Cook the garlic and coriander stems, stirring, for 1 min or until fragrant. Add the carrot, olives, lemon slices, tomatoes and stock and bring to a boil. Reduce the heat to medium and cook, covered, for 10 mins to develop the flavour. Add the chicken and cook, uncovered, for 10 mins or until tender.

5. Meanwhile, put the couscous and 20g chopped butter in a large heatproof bowl, pour over 200ml boiling water and cover with a plate. Stand for 5 mins or until the water is absorbed. Season with salt and pepper, then fluff the grains with a fork.

6. Put the yoghurt, 2 tsp lemon juice* and 1 tsp harissa seasoning* in a bowl (harissa contains chilli so add according to your heat preference). Add 1 tbsp extra virgin olive oil, season with salt and pepper and stir until combined. Divide the couscous and chicken tagine among plates. Scatter with the remaining coriander and serve with the harissa yoghurt.

Take a look at the recipes we’re currently loving or browse through our catalogue of all-time favourites. 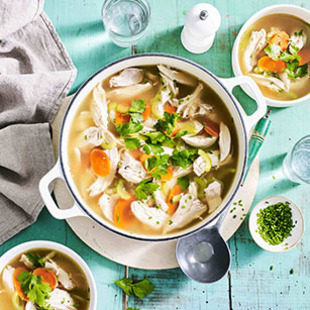 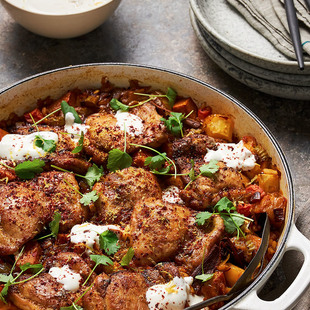 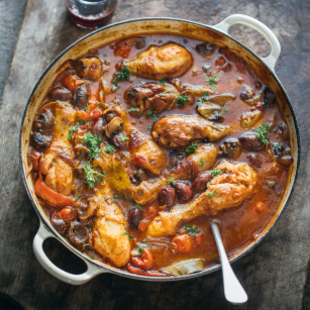